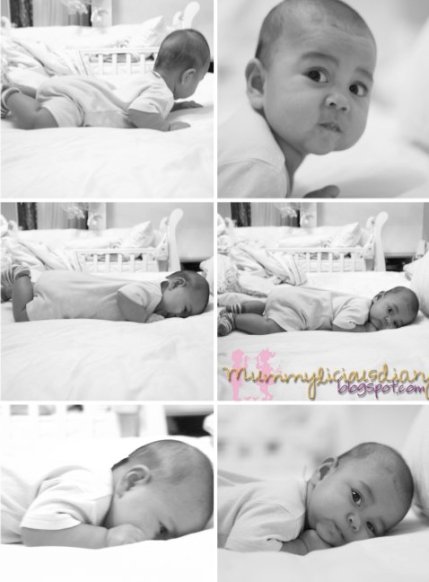 Bimbi rolled over by herself yesterday (6th May, 2013 – which also happens to be my parent’s wedding anniversary) YES!!

The first important developmental milestone achieved (atleast to an extent) and one of the most immobile phase in an infant’s life is over. Although I have been prodding and bribing her in quite unsuccessful ways to begin rolling over, this milestone and achievement came without me being around to witness it. Boo! Well, it so happens, that while we were all sitting for dinner at the dinner table, I had placed Bimbi on a play mat at the other end of the table, which is relatively more spacious and airy from the part of the dining area where I was seated. In short, she was on the floor on the opposite end of the table, and completely outside my view. While her father and grand father were within viewing distance, they were busy watching the IPL. I was busy eating and talking to her, despite the distance, when suddenly there was silence from her. I looked at the husband and asked him to see, and he was like, “Oh My God, she’s rolled over!!!” I almost jumped up from the table to look, and here she was in all her glory, lying on her stomach doing a mini push up and acting all cool and stuff. We locked eyes and I got a big grin, which before you could say roll over, became a huge cry. I coaxed her verbally to calm down as I did not want to stop her from this new thing that she was mastering. Suddenly, after about 2 minutes, she was again on her back! “Oh My God, she’s rolled back again!!!” was the husband’s response.

I was delighted and frustrated together. Here I was spending all days with her trying to get her to roll over and my darling had chosen the exact time when she was away from my eyes to do it. Wonderful, just wonderful! By the time I gobbled up my lunch in a hurry (a norm in the house these days) she was still on her back acting all cool and brazen about her achievement. When I went to pick her up, she gave me a BIG grin followed by the loudest cries for the day, because she realised all this coolness had made her hungry before time. I picked her up to feed her and put her to bed. And she slept – after 2 weeks of giving us the terrorizing sleep deprivation where in the husband and I had turned into  zombies for all purposes, she slept like an angel from 9:30 p.m. to 7:30 a.m. straight with 2 wakings for feeding only. Hopefully, that is the end of the maddening thing called the “4 month sleep regression”. This was simply a crazy time when my daughter wanted to be up and about ALL THE BLOODY TIME. If you thought you have handled growth spurts and can manage this – you are WRONG. No you cannot. Well, atleast not in my case.

But after putting her to bed, I was delirious. I need to baby proof the home… my little one is growing up… I can sleep well now, but I have trouble falling asleep. Oh My God, just Oh My God !!! So I did the one thing every sane mom would do in such a situation, played a couple of games on my tab and did absolutely nothing enjoying the peace, before dozing off!

Well, at least she has achieved something and I am beginning to see a sparkle, if not a light at the end of this sleepless tunnel. Now, for the next big milestone. Phew!

ETA: You may like this link which pretty much explains all that was going on with Bimbi recently

What are you looking for